Former champs back atop FFCBC 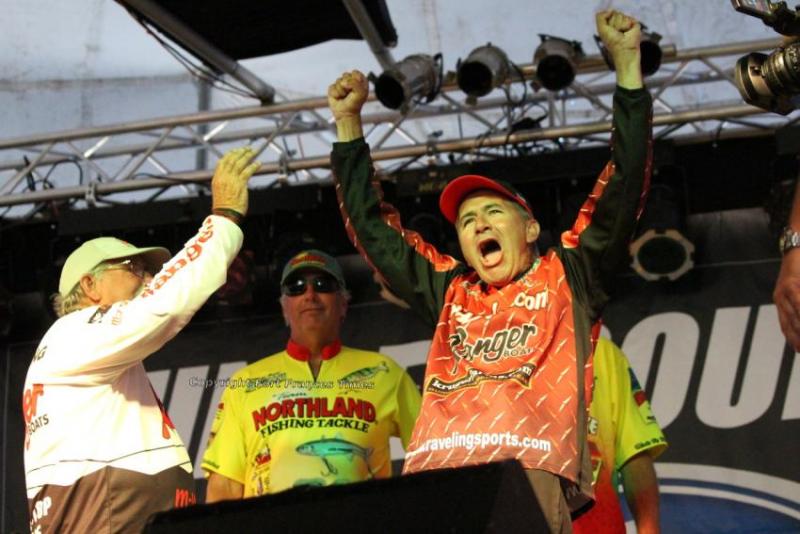 It had been seven years since they hoisted the trophy, so no doubt they were elated.

Mark Raveling of Longville, Mn. and Mike Luhman of Deer Park, Wis. are back in the spotlight after their three-day haul of 53.6 pounds was good enough to give them the title at the 25th-annual Fort Frances Canadian Bass Championship.

Leaving the docks in first place with 37.03 pounds, Raveling and Luhman added a 16.57-pound bag on Saturday to top the 96-team field and secure the $25,000 winners' cheque—the largest first-place prize in tournament history.

Although that total was less than when they had won their first title together back in 2012 (55.06), it still was enough to hold off Day 1 leaders, Lauren Ras and Chuck Olson of Bemidji, Mn., who settled for second place with a three day total of 52.37 pounds.

“It is an honour to fish the 25th anniversary and then to win it, it's unbelievable,” beamed Luhman.

It's an honour to win," added Raveling.

“And it being the 25th anniversary, I believe this is our 22nd time fishing it.”

Taking third was Tony Casareto of Rainier, Mn. and John Sandberg, who reeled in 49.65 pounds of bass.

They also had the big fish on Day 2, and of the tourney itself, when they wowed the crowd with a 5.82-pound monster.

Five-time FFCBC champs, Joe Thrun (Annandale, Mn.) and Jim Moynagh (Carver Mn.) occupied the hot seats before the top-10 boat parade began on Saturday after their Day 3 haul of 18.7 pounds temporarily vaulted them into the lead.

The duo settled for sixth place with a three-day total of 47.55 pounds.

Stuart and Diane Neniska of Kenora were seventh (46.39), followed by Bill Godin of Devlin and Dave Lindsay of Kenora (46.11) and Connor Burton and Jeff Engstrom of Kenora (46.1).

Last year's champs, Bryan Gustafson—who was a former local resident but now lives in Kenora—and Brian McNanney of Sioux Narrows, rounded out the top 10 with a three-day weight of 45.95 pounds.

Devin Stromness teamed up with Travis Stromness to fish up a storm on Day 3 and win the Second Division title.