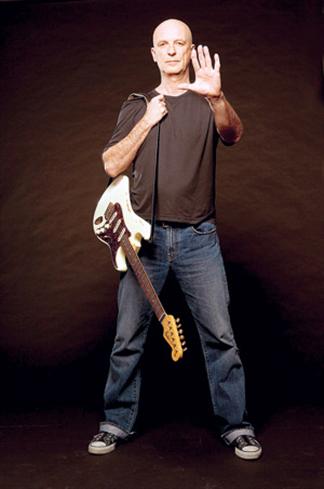 Classic rocker Kim Mitchell has been announced as the main headliner for the nighttime entertainment lineup at this year’s Fort Frances Canadian Bass Championship in July.
Mitchell will be playing under the big tent at the Sorting Gap Marina on Thursday, July 23, with doors opening at 7 p.m. and the show starting at 8.

“Kim Mitchell is a Canadian rock legend. He’s got a ton of hits,” enthused Adam Armit, nighttime entertainment director for the FFCBC.
“If you don’t know the name, you’re going to know the music.
“He’s a great guy, he’s got a lot of great tunes out there that’ll get everybody rocking,” added Armit. “So it’s definitely worth coming out to.”
Also sharing the stage that Thursday evening as the opening act will be Thunder Bay band “Money Honey.”
“Whole Lotta Angus,” a Winnipeg-based AC/DC tribute band, is slated to play here Friday, July 24 at 9 p.m.
“AC/DC is always a big hit,” noted Armit, adding that having the tribute band play hopefully will appeal to those unable to make it to Winnipeg when the Aussie rockers’ tour hits the city in August.
Prior to “Whole Lotta Angus,” from 7-9 p.m., will be a free family show put on by Damian the Hypnotist, who has been the host MTV’s Spring Break and been on SIRIUS radio “a ton of times,” said Armit.
“So he’s pretty well-known.”
And returning by popular demand for the Saturday night (July 25) will be “Bon-Journey,” the tribute band that covers both Bon Jovi and Journey which played at the FFCBC last year.
“I’ve just heard so many good things from the public and such that we decided to bring them back,” Armit explained. “The demand was huge.
“Numerous people wanted them back, so that was a no-brainer.
“I’m sure everybody’s going to have a good time,” Armit said. “I feel really confident with the entertainment schedule we’ve lined up.”
Choosing to go with bands that play classic rock comes from what the demand from the public has been, Armit noted.
“The demand for that type of music, it’s just the community would like it,” he reasoned. “The classic rock section for Kim Mitchell is always a big hit, which is why we decided to go with that over something such as country.
“From things we’ve done in the past, compared to what we know, people like type of thing.”
Input from the public also has meant entertainment won’t be running on the Monday, Tuesday, and Wednesday night during the FFCBC like it in past years.
“What we’ve heard [is] that everybody kind of wants it shorter,” said Armit. “So we’ve decided to do that.”
“We’ve eliminated the battle of the bands, the [boat] parade, MuchMusic, ‘Quest for the Best,’ all of those, and we’ve decided to keep the Thursday, Friday, [and] Saturday entertainment and put it all under one all-access pass.
Armit said the all-access pass is a really good deal. For $40, this pass will get a person into all the entertainment, he said, noting that by buying it, people will save around $20 compared to if they were buying tickets for the shows at the door.
“And it doesn’t hurt to go out and get it now,” Armit added.
Passes will first be available at the FFCBC’s booth during the Fort Frances Chamber of Commerce home and leisure show this Friday and Saturday (May 1-2) at the Memorial Sports Centre.
After that, they’ll be available at Canadian Tire, Sight & Sound, Northwoods Gallery & Gifts, and the Chamber of Commerce office here in Fort Frances, the CC Complex on Couchiching, and Emo Drugs in Emo.