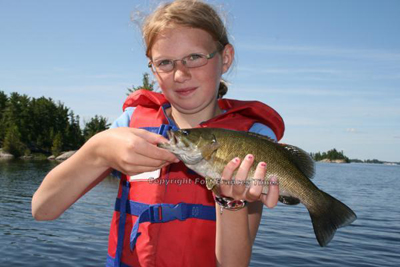 Harleigh Brow-Rose, 10, held up a 1.08-pound bass caught by her partner, Rollie Roy, during the annual “Kid-Pro” tournament yesterday. Brow-Rose’s only catch of the day was a snapping turtle. Fourteen kids participated in this year’s tourney, which was won by Aric Supinski teamed up with Mike Salvador and Reid Norine (11.11 pounds).

Big smiles, big fish, and lots of sun helped make the 2009 “Kid-Pro” tournament a success yesterday.
Fourteen local youngsters partnered up with anglers competing in the Fort Frances Canadian Bass Championship later this week, who took a day off from pre-fishing to teach a few tricks to the younger generation.
Although 14 is a far cry from the 30-some teams in earlier years, the 11th-annual “Kid-Pro” went well, according to Linda Plumridge of the FFCBC.
“The weather was good, the kids had fun,” said Plumridge.
She added there were a few of the usual upsets—boat trouble and truck trouble—but other than that, everything went smoothly.
“It’s an opportunity for the anglers to work out the bugs [before the main tournament],” Plumridge observed.
Plumridge did admit she was disappointed in the low numbers of kids who signed up.
“I hate to have to turn away an angler who has said, ‘Yeah, I’ll participate,’ just because there aren’t enough kids,” she remarked.
Aric Supinski teamed up with Mike Salvador and Reid Norine to capture this year’s “Kid-Pro” title, reeling in 11.11 pounds of bass.
Andrew Nichols, fishing with Tony Richards and Scott Crowe, came in second with 10.39 pounds.
Danielle Jackson and Hunter Calder, both fishing with pro angler Jeff Gustafson, were a close third at 10.36 pounds.
Fourth-place finisher Lynton Mounk caught the biggest fish of the tournament (4.29 pounds).